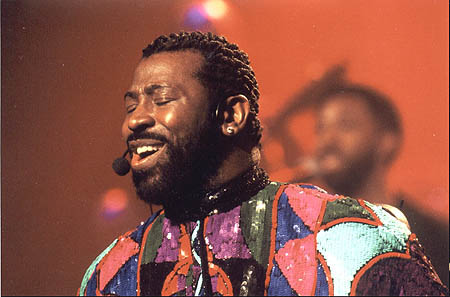 – Today started off on a sad note, as I woke to find that R&B singer Teddy Pendergrass passed away yesterday at the age of 59. He has had health issues over the years due to a car accident in the early 80s that left him paralyzed, and while the family has not given the exact cause of death, they have indicated it was related to injuries incurred from the crash.

Teddy was a founding father of the 70s R&B music that I know and love, and while you may not know a lot of his music, you may know his stuff through covers by more contemporary artists. First and foremost, “If You Don’t Know Me By Now”, originally a huge hit for Pendergrass while a member of Harold Melvin & the Blue Notes, started off as an R&B classic, but became a pop classic in the 80s because of Simply Red taking it to #1. He even appeared on Whitney Houston’s debut, dueting on “Hold Me”, which was released almost a year prior to her breakthrough “You Give Good Love” and got to #46 on the pop chart. I would want Teddy to go out on a high note, so here is his 1988 hit “Joy”, which went to #1 on the R&B chart and #71 on the Hot 100.

– The first two episodes of American Idol have been yawn-worthy, with only a couple of exceptions. When a 62 year-old guy singing about pulling your pants up is the best highlight of a two-hour show, I ain’t watchin’. Wake me when it’s Hollywood Week, mm’kay?

– “Tik Tok” continues its assault on the American public by holding at #1 for a fourth week. While I can acknowledge the catchiness of the track, I am still repelled by the imaging and positioning of Ke$ha, and I don’t care to partake. Maybe that makes me an elitist in some form, but I know folks that can love a Katy Perry song while still despising the artist, so maybe this falls into the same category. My guess is that the comparisons to Lady GaGa will end soon, and she will fade into the abyss. Or maybe that’s my wish.