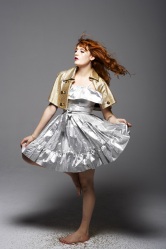 I haven’t talked much about Florence + the Machine here (XO will give you the full run-down on that), but I came across something this afternoon that I have to share. Billboard has been posting a Monday Mashup series with one artist performing another artist’s song (think Radio 1 Live Lounge), and today finds Florence performing a cover of Mario Winans’s “I Don’t Want to Know” from 2004. Those who know Florence’s music won’t be surprised when I describe the version as haunting and profound, but she gives an R&B ballad about cheating a weight that it never had in its original version.

The series as a whole is interesting, although some of the mashups are less than stellar. Jay Sean’s cover of the Script’s “The Man Who Can’t Be Moved” is less than appealing, and season 7 Idol finalist Jason Castro loses the point of Gnarls Barkley’s “Crazy” in an acoustic arrangement. However, Diane Birch extracts a bluesy R&B vibe from Haddaway’s “What Is Love” that turns the club classic into a plea for mercy. I will take a few dogs to find gems like this.