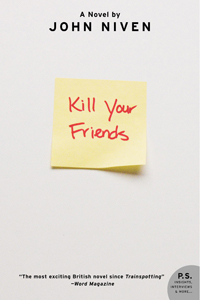 I have a friend that is heading out to London in two weeks for the start of a European vacation, and he put out a general call for suggestions on what to read while he is on vacation. Instantly, I had a suggestion, based on my own leisure reading during my trip.

With the record industry in turmoil, this thoroughly twisted roman a clef from a former A&R insider couldn’t seem timelier. Set in 1997, this debut novel follows the loathsome and morally bankrupt 27-year-old Steven Stelfox as he curses, drinks and snorts his way through a cutthroat career. Crass and bitter, Steven despises everything that originally inspired him, and as the bills pile up from his various illicit habits and ventures, he tries in vain to find the “next big thing” so he can secure another bundle of money. Satirizing Big Music, the novel brims with self-evident truths–as Steven explains, he usually only hits one in every 10 acts, but even that allows him to do better than most. As Steven’s arrogance precariously struggles against a healthy dose of paranoia, he faces his ultimate nightmare: he might actually have to sober up, do some work and break out a decent record by a decent act. (Publishers Weekly)

Anyone who knows me or has read this blog knows that I am a radio and record industry junkie. (BTW, R&R RIP) Having dealt with record company folk for years between my radio and music retail gigs, I will say that this characterization seems a bit extreme, but I never was involved with the A&R folks, either. John Niven spent many years in the industry, so I am sure he knows what he speaks of. However, the narrative of Kill Your Friends is so extreme that I would not recommend this book to someone who is offended by rude, crude, and violent language. Just keep the title of the book in mind.

If you have a twisted sense of humor, this book could be a great match for you. In addition, the book also provided me some perspective on local landmarks and areas of town, and kept me occupied during some of my extended rides on the Tube. I would not have gotten references to “The City” (the business district of London) unless I had actually been in the middle of it, knowing the specific context. One suggestion, though…do not read it on a crowded train unless you don’t mind being looked at for giggling to yourself when everyone else is absolutely stoic. Kinda awkward.