As if I haven’t just cut my chest open and showed you who I really am, here’s a little bit of self-embarassment provided by our good friend Dan. 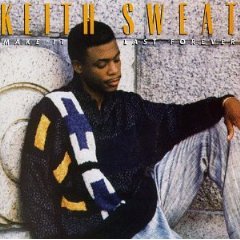 1. What was your first CD? And do you still own it?

My first CD was Keith Sweat’s “Make It Last Forever”, back in 1987. I didn’t have a CD player at the time, but I acquired one soon after that. “Forever” is actually a pretty revolutionary disc in my opinion, as it was the first fully realized “New Jack Swing” opus. While I know that some would argue that Teddy Riley should be given full credit for the rise of New Jack Swing, it took a performer like Keith Sweat to put a face and persona on it. I don’t own the CD, but I have his greatest hits (which includes at least half of this disc) on my iTunes.

2. What was the last physical CD you bought?

It’s a tie for the last disc between the two Raining Jane CDs I bought at the Sara Bareilles show. Having said that, I don’t actually listen to the CDs. They get transferred to my computer, and in many cases, that’s the last time they will be touched. The whole band, however, signed “Paper Nest”, so that will go into a secure location for future reference.

3. Most memorable make-out to music moment?

The most memorable make-out music was actually a break-up situation as well. A guy I was seeing in college broke up with me while we were lying in his bed by playing Bonnie Raitt’s “I Can’t Make You Love Me”. He played it the first time, and it didn’t really register. When it played the second time (it was a promo single with two versions of the song), I got the hint, and started bawling. Apparently, he was attempting to predict my reaction to the break-up. He was on target, apparently.

When I was in Junior High, I took my album covers and stapled them up on my wall. Stuff along the lines of “Thriller”, “Hi Infidelity”, “I Feel For You”, and “Can’t Slow Down” remained up for close to a year. Then I got my own room that had been remodeled, and there were no more stapling allowances.

5. Biggest regret of a musical purchase?

I’m gonna go in a different direction with this, and say that selling my vinyl collection in college in order to fund my last year of school, is my biggest regret. I had some GREAT 12” singles in that stash from my time as a DJ.

Hmmm…recently, that would be “The Block” from the New Kids, although I stand by that purchase as a solid pop album. Maybe I should go back to my very first music purchase, which consisted of the 45s of “The Rainbow Connection” and “The Devil Went Down to Georgia”. Cool at the time, but not exactly highbrow listening now. (I won’t deny my enjoyment of both songs, though. “Rainbow” is a classic, and “Devil” was pretty innovative for its time.)

My biggest musical aberration is probably the sole Gospel tune in my iTunes library. That distinction goes to Yolanda Adams’ “Open My Heart”, which is about as inspirational a song as I know. Not only do I own the original, but I also have the 11-minute Junior’s Sunday Morning Club Mix. [Since I only own the dance version of Mary Mary’s “Shackles”, I’m going to pretend that it doesn’t count.]