So just on a whim, I swung by shayne-ward.com yesterday, and was rewarded with a new blog entry. Lots of sun, blah blah blah…depressing World Cup result, blah blah blah…and then the good stuff:

My recording sessions are coming to a close and the next step is to choose the first single..exciting! Once the first single has been decided things will fall into place very soon! That’s when all systems are go. There’s a real buzz from myself and the label and we’re very excited about my return to the stage. Seeing all of you again is a huge deal for me. I miss you all like crazy and I’m really looking forward to this.

Post goes on to mention training, Temper Trap, and Glastonbury. If you got back a bit on Twitter, Shayne told a fan over the weekend that he will probably be playing a gig in London in September or October, which seems about right to get a project off the ground that has just been finished up. In the meantime, we will just have to listen to the new Maroon 5 track “Misery” over and over. I’m convinced that if the song had come out earlier, Katy Perry would not be #1 on the charts right now. Consolation comes with a pic of Shayne at the driving range, showing off the results of his training. 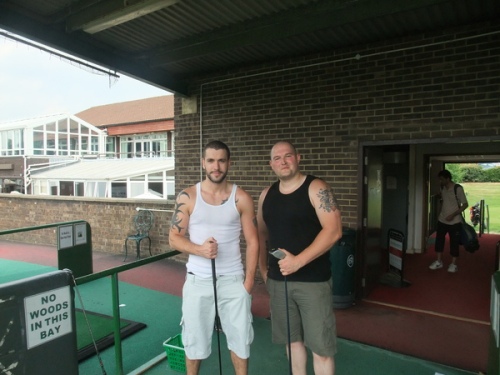 5 comments on “Shayne Drives It Home”