So just on a whim, I swung by shayne-ward.com yesterday, and was rewarded with a new blog entry. Lots of sun, blah blah blah…depressing World Cup result, blah blah blah…and then the good stuff:

My recording sessions are coming to a close and the next step is to choose the first single..exciting! Once the first single has been decided things will fall into place very soon! That’s when all systems are go. There’s a real buzz from myself and the label and we’re very excited about my return to the stage. Seeing all of you again is a huge deal for me. I miss you all like crazy and I’m really looking forward to this.

Post goes on to mention training, Temper Trap, and Glastonbury. If you got back a bit on Twitter, Shayne told a fan over the weekend that he will probably be playing a gig in London in September or October, which seems about right to get a project off the ground that has just been finished up. In the meantime, we will just have to listen to the new Maroon 5 track “Misery” over and over. I’m convinced that if the song had come out earlier, Katy Perry would not be #1 on the charts right now. Consolation comes with a pic of Shayne at the driving range, showing off the results of his training.

So a few days of downtime to get life and everything that goes with it in order turned into almost 2 weeks away. My 94-year-old grandfather passed away, and while I wasn’t able to get back to see the family right away (that’s coming in July), I have had to take some time and process everything. Life is chaotic but still okay. Happy Father’s Day to all the dads that stuck around and did the right thing. You know who you are…

– Billboard posted an excellent retrospective last week of the 50 biggest hits of Michael Jackson on the Hot 100. These types of reviews are always interesting to me, but when you have all of the chart data at your fingertips, it’s the chart version of catnip to a music dork like me. I was very surprised by the song atop the listing, but once you break it down it makes perfect sense. Here’s a little fact I never knew: Michael recorded “State of Shock” with Freddie Mercury before he teamed up with Mick Jagger. 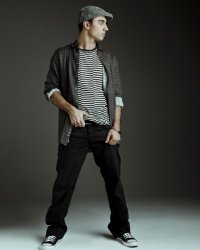 – PMN favorite Tino Coury is on course to score his first Top 40 pop hit, as “Diary” is poised to move from #45 to #40 on this week’s Pop Radio airplay chart. Final numbers aren’t in quite yet, but this has been a long time coming. The guy has been travelling all over the country, playing shows wherever they will have him, and it seems like that hard work has finally paid off. With several songs ahead of his dropping rapidly, Tino should be able to cover some decent ground in a short amount of time. Here’s a short clip of Tino singing a song I assume will be on his debut album this fall called “Miss America”.

– Speaking of slow-building hits, VV Brown is at #49 as of this evening on iTunes with “Shark in the Water”. I won’t lie…I thought this track was dead in the water, but it has been hanging around and popping up in unusual places. I walked into a fast-food restaurant a few weeks ago, and the video for “Shark” was playing on the in-store TV network. I’m sure that opening for Maroon 5 this summer won’t hurt her profile one bit. Here’s hoping that the trend of talented British artists finding success here in the US continues.

In addition to her music, VV also has a series of comics out called The City of Abacus. Being a big fan of comics from an early age, my ears perked up a bit when I heard about it. Check out the video below where she talks about her favorites, as well as the inspiration for the series. For more info, you can check out thecityofabacus.com.

– Upcoming posts will feature reviews of concerts by La Roux, Janelle Monae and Erykah Badu. The summer hasn’t even formally started, and it is already a hot one.