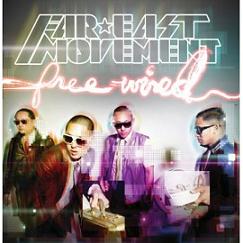 There are CDs that you wait weeks, months, and even years for, and then there are CDs that you decide to check out on the spur of the moment. Chalk up my purchase of Far*East Movement’s debut CD Free Wired to the latter. I’ve been loving “Like a G6,” although it hasn’t been a track that I’ve gone out of my way to hear. The hook for me was hearing that the second single was going to be a collaboration with Ryan Tedder called “Rocketeer.” They’ve got somebody’s ear, and they are on Cherrytree, which is the hot label at the moment, so why not? Besides, I was upset to have missed them when they opened for Robyn in San Francisco.

The album is seriously all that, and then some. Is it a critic’s choice kinda CD? Well, probably not. But when a new group hooks up with as many great artists as FEM has and makes it work, you’re in for a bumpin’ ride. While “Like a G6” brings back old-school bass funk, the previously mentioned “Rocketeer” has a much more contemporary pop sound thanks to Tedder and should do well at pop radio upon its release. The following track “If I Was You” has just enough of Usher’s “OMG” vibe to fit in on the radio, but with the bonus of a vocoder-fabulous Snoop Dogg bringing some of that “Sensual Seduction” delivery. 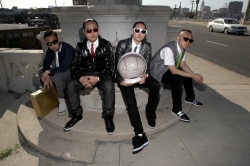 I’m torn on making comparisons between Free Wired and other contemporaries because I think it may push some away, but highlight “Don’t Look Down” with Keri Hilson is very reminiscent of the Black Eyed Peas’ “Meet Me Halfway”. In fact, a good chunk of this record could be a demo of tracks the BEPs would probably jump at recording themselves. Having said that, closing track “2gether,” which finds the guys collaborating with Roger Sanchez, is potentially the most original sampling track this year simply by using the B-52s “Love Shack.” Never thought I’d see that track used on a record, let alone as effectively as it is here.

Overall, the CD is solid, with just enough filler thrown in to keep at great instead of amazing, but I’m not complaining. If you like a variety in your party mix, then Far East Movement are the guys for the job. Next time, I’m not showing up late for the show if they are opening.