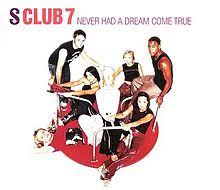 It seems strange to say that S Club 7 was the biggest of the three in the United States. Between two albums charting on the Billboard 200 chart and their TV show airing on Fox Family, they were not a flash in the pan, even if their fans were mostly kids. In 2001, S Club 7 released their 2000 UK charity single “Never Had a Dream Come True” in the US, becoming their biggest chart success. “Dream” reached number 10 on the Hot 100 and number two on the US singles sales chart. The band (renamed S Club after Paul Cattermole left the fold) was not able to capitalize on that success despite releasing a US-specific compilation in 2002 entitled Don’t Stop Movin’, and they broke up the following year. Even though there have been several rounds of rumors over the past few years that a reunion was inevitable, S Club has not fully reformed.