I See As I Say

Okay…you know the drill. Watch the video and take notes. There will be a quiz. 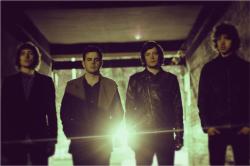 Yes, it’s a Late Late Show promo for a week of host Craig Ferguson returning home to Scotland with his talk show in tow. There is a lot of Scottish scenery, goofy dancing and mugging for the camera, but if you know me, it’s the music that caught my attention. “Imagineer” is from a Scottish band called (suprise) the Imagineers, and they were chosen by Ferguson to appear on the show based on the criteria that he would have wanted to be in a band like this back in his years as an amateur drummer.

With the huge success of Mumford and Sons over the past two years in the US, it isn’t hard to imagine a song like “Imagineer” catching on, and having a late-night talk show playing your song over and over won’t hurt either. The episodes started airing on Monday May 14th and continue through the 18th. In addition to their self-titled song, they are also performing other songs on the show, including their take on the show’s theme song. For a taste of the Imagineers in action, check out the live video below.