If you want a full, thoughtful recap of the VMAs, look no further than Rich’s amazing breakdown of the events (with some amazing screen caps) at fourfour, because he gets almost all of it. I disagree slightly on one or two points, but overall, he needs to get out of my head right now.

Having given you the full breakdown, there are a couple of things that I feel compelled to highlight.

– Madonna, for all of her bad choices of late, is being hailed as a class act for her introduction. Leave it to me to throw cold water on that one. Her intent may have been good, and I believe she was completely sincere in her commentary, but to create this intense bond via the similarities of their circumstances, and then use it to say “he was more fucked up than I will ever be, but I hold myself (and all of you) responsible for his downward spiral” seemed a tad arrogant to me. 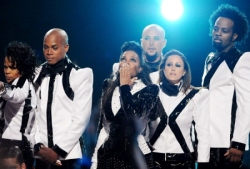 – I defeated myself with Janet, because the initial buzz made it sound like she was going to be the heart of this dance extravaganza, but cooler heads prevailed, and she did the most appropriate thing possible. The way they only used his part of the video dance scene, and then got the camera angle of her dancing with him in the right position, was perfection. My initial disappointment with the lack of Janet turned to relief that a) she didn’t embarrass herself; and b) she didn’t embarrass Michael.

– Speaking of Janet, after the show, she released a new song on her website that I am really enjoying. “Make Me” harkens back to that disco vibe of “All for You”, which leads me to believe that this is a product of her revived connection with Jimmy Jam and Terry Lewis. More please!

– I’m torn on the best performance of the night. P!nk’s high-flying acrobatics to “Sober” were truly impressive, but for sheer fun and impact, Beyonce won me over with her army of “Single Ladies”. I got a bit of a kick out of Green Day inviting the entire audience up on the stage at the end of their song, too. Boos to the security gorillas dragging people off the stage after the invite. 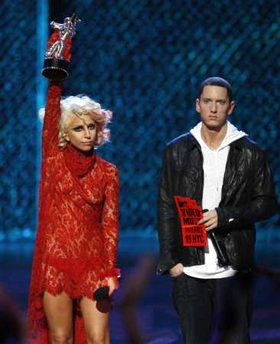 I actually LAUGHED at the “death” scene. The blood was so hilarious to me that I am sure people in the next house over heard my guffaws. Note to GaGa…if you’re going to simulate a death and hanging on a family-rated awards show, use some subtlety. This is coming from a fan, so don’t take this as just another hater. Just calling it as I see it.

One more thing…Eminem got what he deserved when he realized that he would HAVE to hug the Lady out of protocol. Karma’s a bitch, bitch.

– I’m sure this won’t be a surprise to anyone, but I will go to the movie theater to see This Is It. For as ghoulish as he looks in parts of the trailer for the movie, it’s going to be a spectacle, and I will be there to see it. 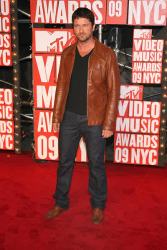 – If anyone is going to get a sales bounce out of this show, I am hoping it is Muse, who completely deserves it. They rocked it out, and I will be looking for the CD coming out tomorrow. Oh, and Gerard Butler introduced them. Just sayin’.

– One final note…reason #74 why we love Kelly Clarkson.