Who Is The Boss?

Posted by John on February 1, 2009
Posted in: Uncategorized. 3 Comments 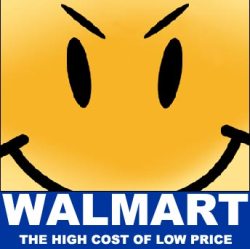 If you haven’t picked up on it from previous mentions (such as comments I have left on certain blogs), I have a “thing” against Wal-Mart. When I lived in Atlanta at the turn of the century, I worked for a company that did business with Toastmaster, who sells small appliances. Toastmaster was approached by Wal-Mart about reducing their price point, and great folks that they are, they already had it figured out. Close down your US production, move it overseas to China (“we’ve got a facility already picked out for you”), and make something that’s cheaper to ship back to the US than to actually make it there. We didn’t lose that many jobs, but just the concept of what went down was disgusting to me, and I swore that I wouldn’t support such a company.

Nine years later, I personally think Wal-Mart has played a small role in our economic downturn by making us more dependent on foreign imports for the sake of saving a buck or two here or there, and not doing enough to protect US jobs. That’s why when I heard that Bruce Springsteen had agreed to an exclusive-to-Wal-Mart Greatest Hits collection, I was a bit stunned. Bruce has always been one to speak out in support of US workers, and he’s normally seen by the Right as a bit radical in his stances, so the fact that he would work with the Dark Empire really shocked me.

In preparation for his Super Bowl performance tonight, the Boss sat down for a pretty wide-ranging interview, and offered a mea culpa on the Wal-Mart deal. In his words:

“We were in the middle of doing a lot of things, it kind of came down and, really, we didn’t vet it the way we usually do,” he said. “We just dropped the ball on it.” Instead of offering the exclusive collection to Wal-Mart, “given its labor history, it was something that if we’d thought about it a little longer, we’d have done something different.” He added, “It was a mistake. Our batting average is usually very good, but we missed that one. Fans will call you on that stuff, as it should be.”

Truthfully, I’m glad to hear it, but it seems like bad timing, since the CD is in the stores, and will probably be a big seller post-Super Bowl. I’m not sure if it’s just an unplanned comment, or if he decided to fall on his sword, but you’ve got to imagine Wal-Mart’s pretty pissed. Would they pull all of his music like they did with Sheryl Crow’s music in the 90s when she trashed the Wal on her debut?

If a ban occurs, it couldn’t occur at a worse time, because Bruce not only has a Greatest Hits out, but he also released his 16th studio album, entitiled “Working on a Dream”. In originally defending the Wal-Mart exclusive, Springsteen’s manager Jon Landau said to Billboard that 15% of the Boss’s music is sold in Wal-Mart. For someone who may be looking to help his mates in the E Street Band stash some money away (my friend Eric has a theory about this), that’s a big chunk o’ royalties to lose.

I haven’t heard the whole CD, but I like what I’ve heard. Maybe it’s just reminiscing, but “My Lucky Day” sounds like something out of the “Born in the USA” era. Check it out below (actual song starts at the 2:04 mark):