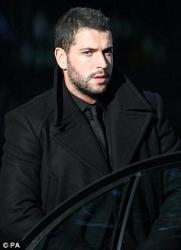 So with the holidays here in the US, I have been a bit out of the loop with my normal updates and blogs, but I got a little surprise this morning in the form of new video blogs from Shayne Ward over at his website. Turns out that he’s been a busy guy recently, even though he’s been flying under the radar. Being the literary sacrificial lamb that I am, I put myself through the arduous task of watching these videos to pull out bits of information for you. In no particular order:

– Shayne expects that the album will be done in December, but is still looking at material to add into the mix.
– Shayne is sporting a full-fledged beard.
– Shayne aspires to be on the cover of Rolling Stone.
– Shayne lists the Bee Gees, the Stylistics, Elvis, Michael Jackson, and Kings of Leon in his musical top 5.
– Shayne seems hell-bent on sharing his chest hair with the camera, even in heavy clothing.
– Shayne hasn’t been to the dance studio recently, but will as the album release gets closer.
– Shayne will definitely have an album to release in 2010.

This is all promising, but it’s all stuff that we’ve heard before. Hopefully Shayne’s management are committed to making release #3 a success, and possibly bringing some of that success over to the US. He’s not going to make the cover of Rolling Stone without it!