With all my talk about David Cook, I’ve left out mentioning the other David from this season of American Idol. Master Archuleta will be releasing his debut CD on November 11th, and the set should do well, based on the initial success of “Crush”. The song seems to be losing a little bit of momentum on the pop charts, but it’s definitely given the full-length a good head start, compared to other Idols that have preceded him.

Take, for example, Blake Lewis, who came in second in the previous season. “Break Anotha” was a hot song, but it just didn’t catch on, and never even made it to the Hot 100. “ADD” (Audio Day Dream) debuted at #10, and then plummeted off the chart. To date, it’s sold less than 350,000 copies, and BShorty was released from his contract with Arista back in June. 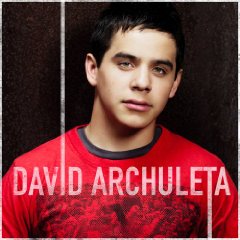 So what can we expect from Archie’s CD? Well, according to unconfirmed sources, here’s the scoop…

OK folks, this is it, David’s unofficial (but pretty sure) new album tracklist. I can’t guarantee the order is correct, but the songs are all supposed to be 100% confirmed…

Okay…Cook gets Cathy Dennis, and Archie gets Daniel Bedingfield. Is Daniel supposed to be a consolation because they couldn’t work it out with him dueting with Natasha? Actually, the coupling makes a lot of sense, with them both having a mild Contemporary Christian vibe going on. The other writing credit appears to be with JC Chasez from NSync, who is just glad to be allowed near a recording studio these days. For a kid who said he’d never written songs prior to the show, that’s not a bad start. Let’s just see how long it takes his Svengali dad to eff everything up.

And if you thought I could let the post go by without some David Cook info, you were wrong. Oh, so very wrong. David will be the musical guest on Saturday Night Live November 1st, which is really primo, considering it will be the last SNL before the election. Rumor has it that Sen. Obama may show up on that episode. In addition, iTunes will start pre-orders for the CD this week, but it’s already available at Amazon, where it’s currently #7 almost a month before its release. Archie’s is currently #33, which still isn’t too shabby.

8 comments on “There’s Another David?”