The Red, Red Rocks of Home 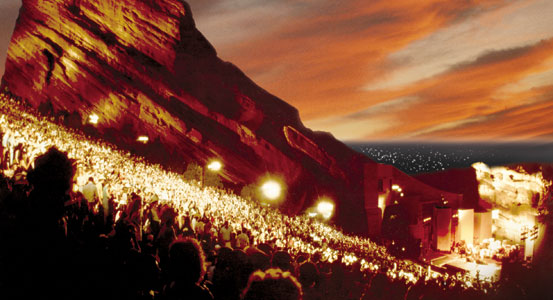 Popdose today posted a review of the Rob Thomas live DVD, recorded at Red Rocks here in Denver. For those of you who have never been to a show at Red Rocks, believe the hype. It’s an amazing live music venue, and whoever came up with the idea of constructing that amphitheater (built during 1920s and 30s) deserves a Grammy just for vision. Just remember to bring a cushion…those concrete seats will kill you for an extended show! The minor inconveniences are worth it, though.

For about five years, I attended at least one show a year at Red Rocks. Alison Krauss, James Taylor, Tori Amos, Aimee Mann and David Gray…all of them just seem to fit the vibe of the space. Not everyone can pull off a show at Red Rocks, which seems to be the gist of the Rob Thomas article. (That, and the author seems to have it out for him, too) When the artist and the venue connect, it’s absolute magic. When Emmylou Harris hits THAT note, and everyone’s spellbound, the rocks just seem to reflect that magic back on to the crowd. If asked to pick my favorite concert venue, this is the one by a mile.

As a result of the magic, Red Rocks has become THE place for many artists to play. I have heard countless opening acts say “I have always wanted to play here”, and I believe them every time. When you look at an artist like U2, and how a live show at Red Rocks just catapulted their career here in the States, you have to believe that the magic can sometimes be bottled and taken out of the venue. Stevie Nicks got a good concert video out of it, although there was some extensive work to make it fully presentable, including live bits recorded without the crowd there. In fact, most live recordings get a LOT of enhancing. You’d be surprised by how much.

So this year, my Red Rocks show will be Jason Mraz in September. I had resisted the siren call of Red Rocks up until last week, but I decided that Jason + Red Rocks = magic. I’ll let you know how it turns out.